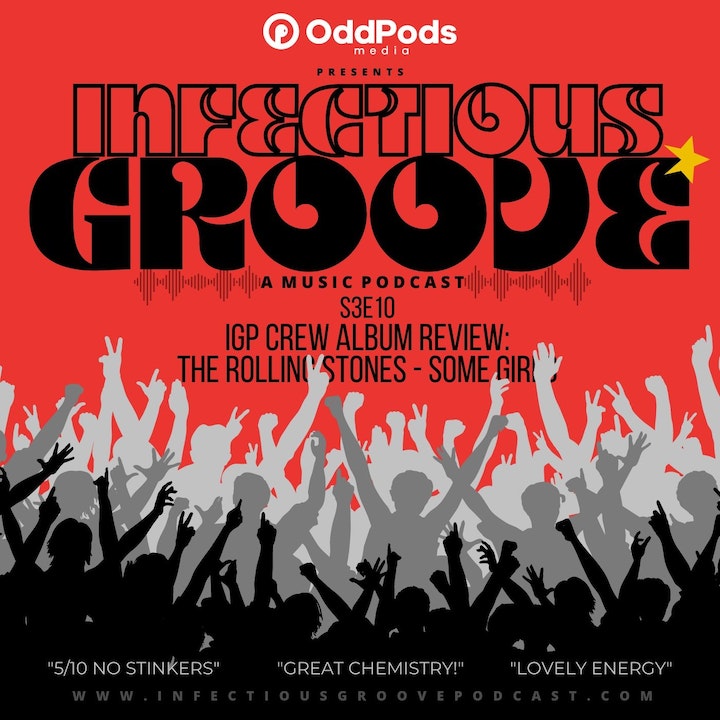 DISCLAIMER: Due to the nature of this episode, it is recommended that you not only take a listen to the album being reviewed but that you also listen to that album at full volume so that you can fully immerse yourself. Thank you for listening and...

DISCLAIMER: Due to the nature of this episode, it is recommended that you not only take a listen to the album being reviewed but that you also listen to that album at full volume so that you can fully immerse yourself. Thank you for listening and joining in on the discussion. Enjoy.

This week we continue with our brand new album review series, where one of us picks an album, and we all take a crack at unpacking, picking apart, reviewing, and then repacking said album. Take a trip with us on this special episode of Infectious Groove Podcast.

By the late 1970s, the popularity of The Rolling Stones was on a steady decline due to the fact that the music charts started to be largely dominated by disco and newer rock bands like Aerosmith and Kiss. Sprinkle in the rising UK punk rock movement which at the time led to most of the artists linked to the 1960s era feeling obsolete. The band had also failed to produce a critically acclaimed album since the early 70s. It was the perfect storm for a wildly successful rock band, to no longer be certain of where they fit in.

That perfect storm led to Mick Jagger focusing creatively on the reinvigoration of the band as a whole. Using NYC as the main inspiration, "Some Girls" was born. Mick, widely regarded as the creative driving force behind the new album, had a vision of how he wanted to get the band back on track and back on the charts. Mick's vision paid off as "Some Girls" climbed the charts as a newly refreshed Stones lineup geared up for chart-topping success once again. "Some Girls" went on to reach No. 2 on the UK album charts and No. 1 on the US Billboard 200. It became the band's top-selling album in the US having been certified by the RIAA for selling 6 million copies by 2000.

Some Girls was the 14th British and 16th American studio album by The Rolling Stones. It's jam-packed with a montage of hits that span a multitude of genres. Everything from Disco to Country, all the way down to that classic Stones sound that we know and love. Hit? Stinkers? Songs that were just meh? We break it all down on season 3, episode 10 of your favorite refrigerator repair man's favorite music podcast. LET'S GO!